BEAVERCREEK – After a slow start Friday Northmont got its high-powered offense rolling to score a lopsided 42-8 victory at Beavercreek to improve to 3-0 overall.

Javien Brownlee (five receptions, 65 yards) got the Thunderbolts on the scoreboard with a 22 yard pass reception from Cade Rice (15-20, 269 yards, three TDs) at the 9:58 mark in the first quarter.

Cameron Jones scored on a one yard run with 41 seconds left in the opening stanza and Xavier Vuong’s second point-after kick boosted the lead to 14-0.

“Beavercreek did a good job in the first quarter,” said Northmont coach Tony Broering. “I’ve known Beavers’ coach Nick Black since he was in high school in Piqua and I knew he would make some great adjustments and he did that, so it took us a minute or two to realize they weren’t doing what we had seen on film.”

Northmont’s defense kept Beavercreek in check throughout the first half. When the Thunderbolts got the ball back Rice fired a 10 yard TD pass to Melvin Howard with 9:51 remaining in the first half for a 21-0 advantage.

Two minutes and 19 seconds later it only took the Thunderbolts four plays to score again. After an incomplete pass Rice hit T.J. Gregory with a 35 pass for a first down at the Beavers’ 40. Rice then fired a 14 yard pass to Markus Allen (four receptions, 95 yards, one TD) for a first down at the 26. From there Malachi Staffney ran it in for Northmont’s fourth touchdown of the night to take a 28-0 lead at halftime.

Northmont returned the second half kickoff for a touchdown but the score was wiped out by as holding penalty to bring the ball back to the Thunderbolts’ 28. Three plays later Rice fired pass to Allen along the left sideline. Allen spun away from a would-be tackle and raced 62 yards for the touchdown to boost the lead to 35-0 after Vuong’s point-after.

“On what happens with plays like that, it is because of my coaching staff. They are phenomenal,” Broering said. “At halftime Mark Mays, Luke Hurst and John Bass before I even join the team they have a great plan on how we can attack in the second half. They have already figured everything out. I am just so blessed to have such a great group of guys to work with. My defensive staff led by big Mike Mangen, they have thrown two shutouts when our first string players are in there for two straight weeks. Those guys are doing a great job.”

With 47 seconds left in the third quarter Jones scored on an 11 yard run. Vuong’s kick put Northmont on top 42-0 to cap the Thunderbolts scoring. After that Broering put in his second string players.

Beavercreek’s only score of the night came on a five yard run by Allan Hopkins with 8:05 remaining. Gabe Phillips caught a pass on the two point conversion to make the final tally, 42-8.

“It took us a minute to get going, but when we have players like we have it is a credit to them,” Broering added. “The boys put in a lot of work and do a great job. They are a great group of kids.”

Reach Ron Nunnari at (937) 684-9124, via email Rnunnari@aimmediamidwest.com or on Twitter @RonNunnari 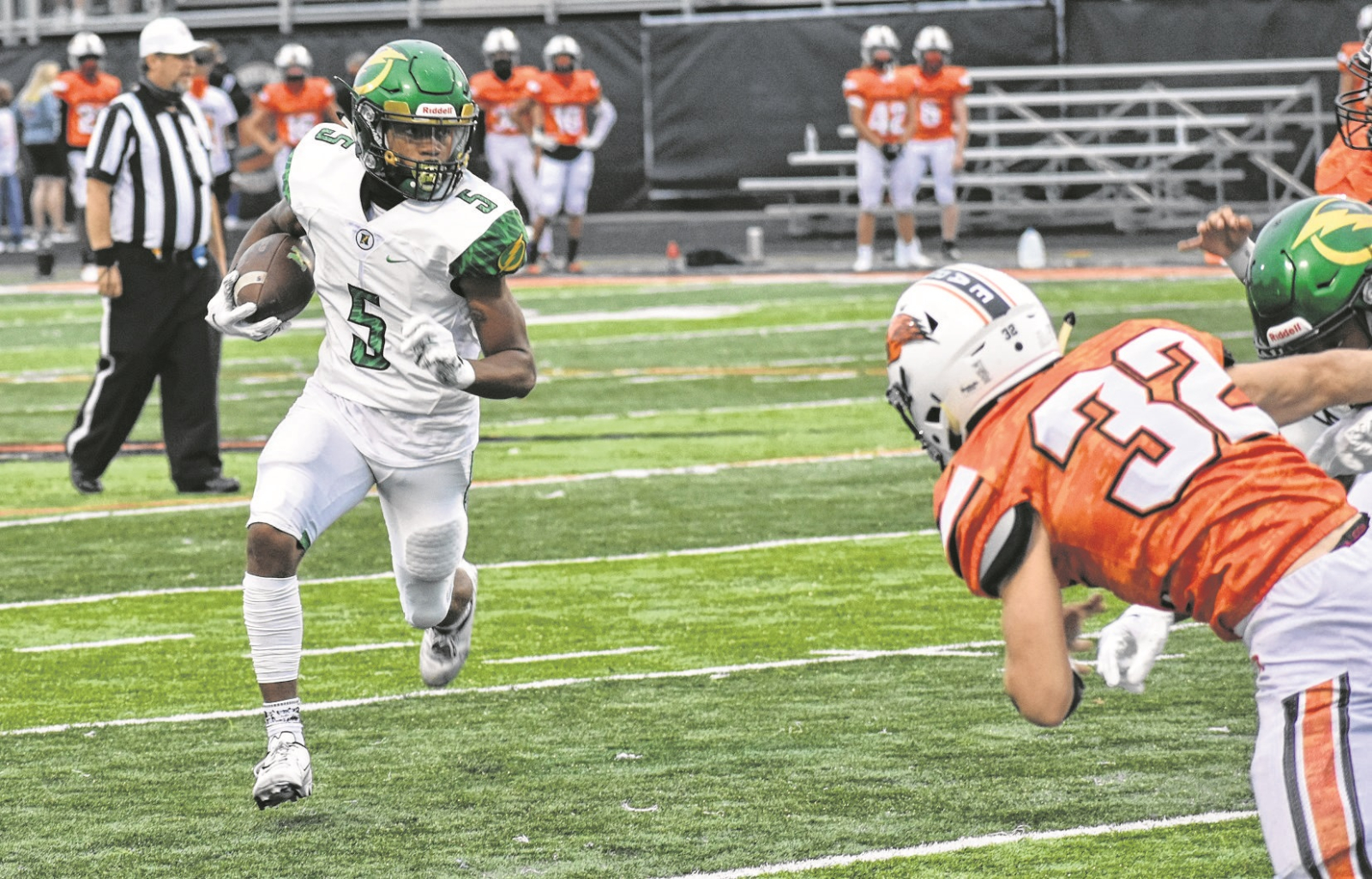 Javien Brownlee picks up first down yardage after making a first quarter pass reception at Beavercreek. 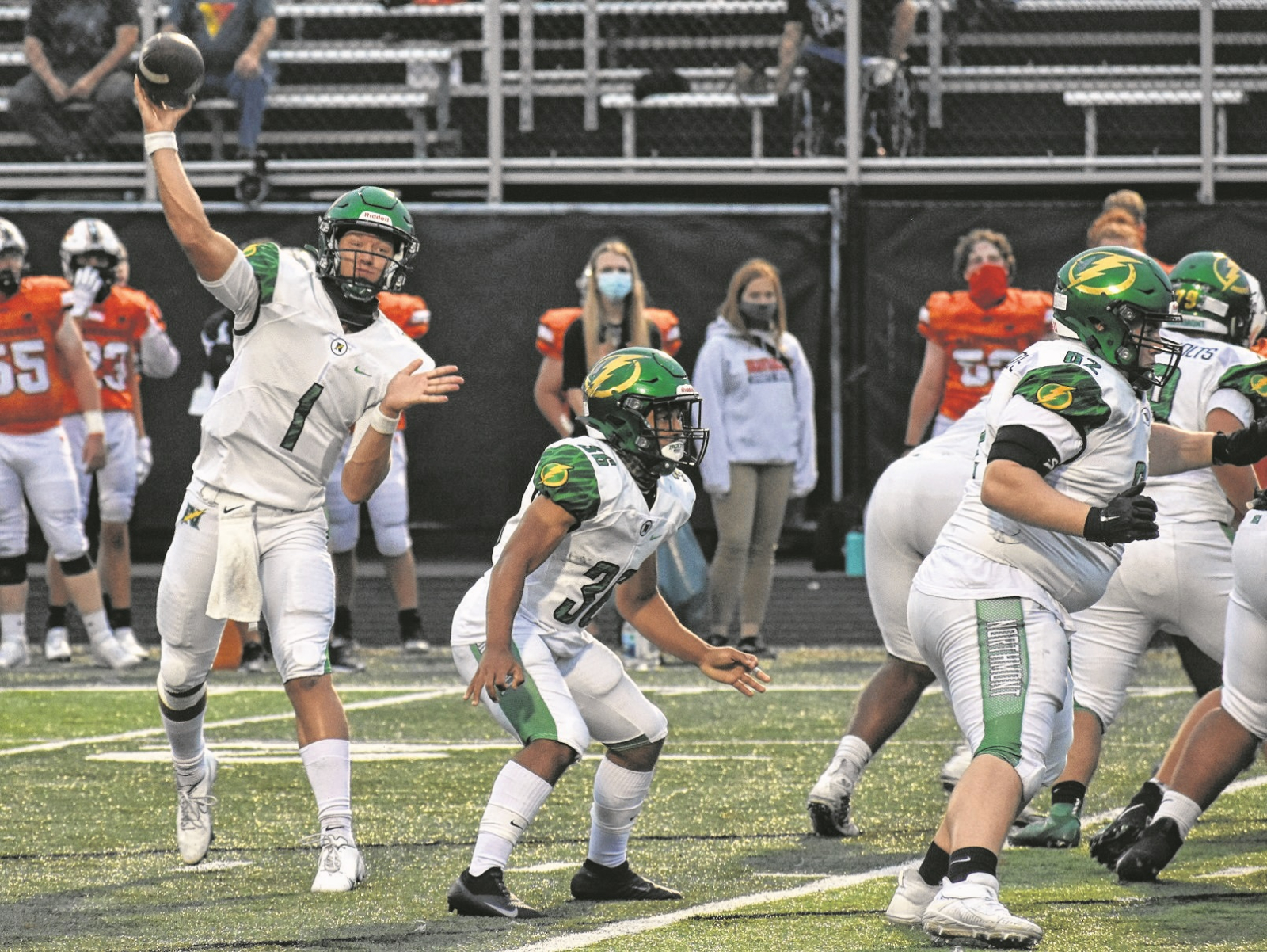 Cade Rice fires a pass toward the right sideline to Zane Venneman. 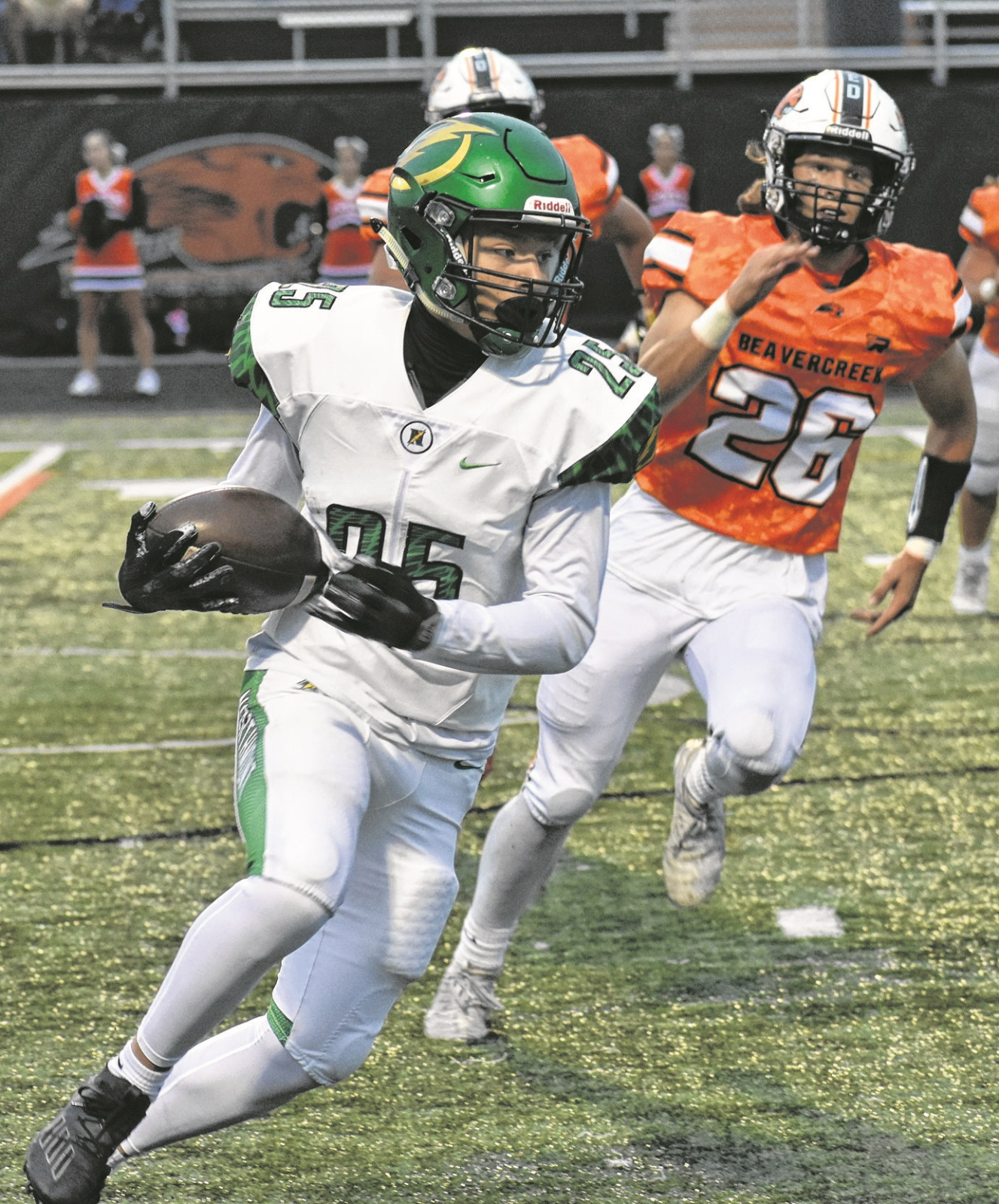 Zane Venneman turns downfield after making a pass reception to give Northmont a first and goal at the one yard line. 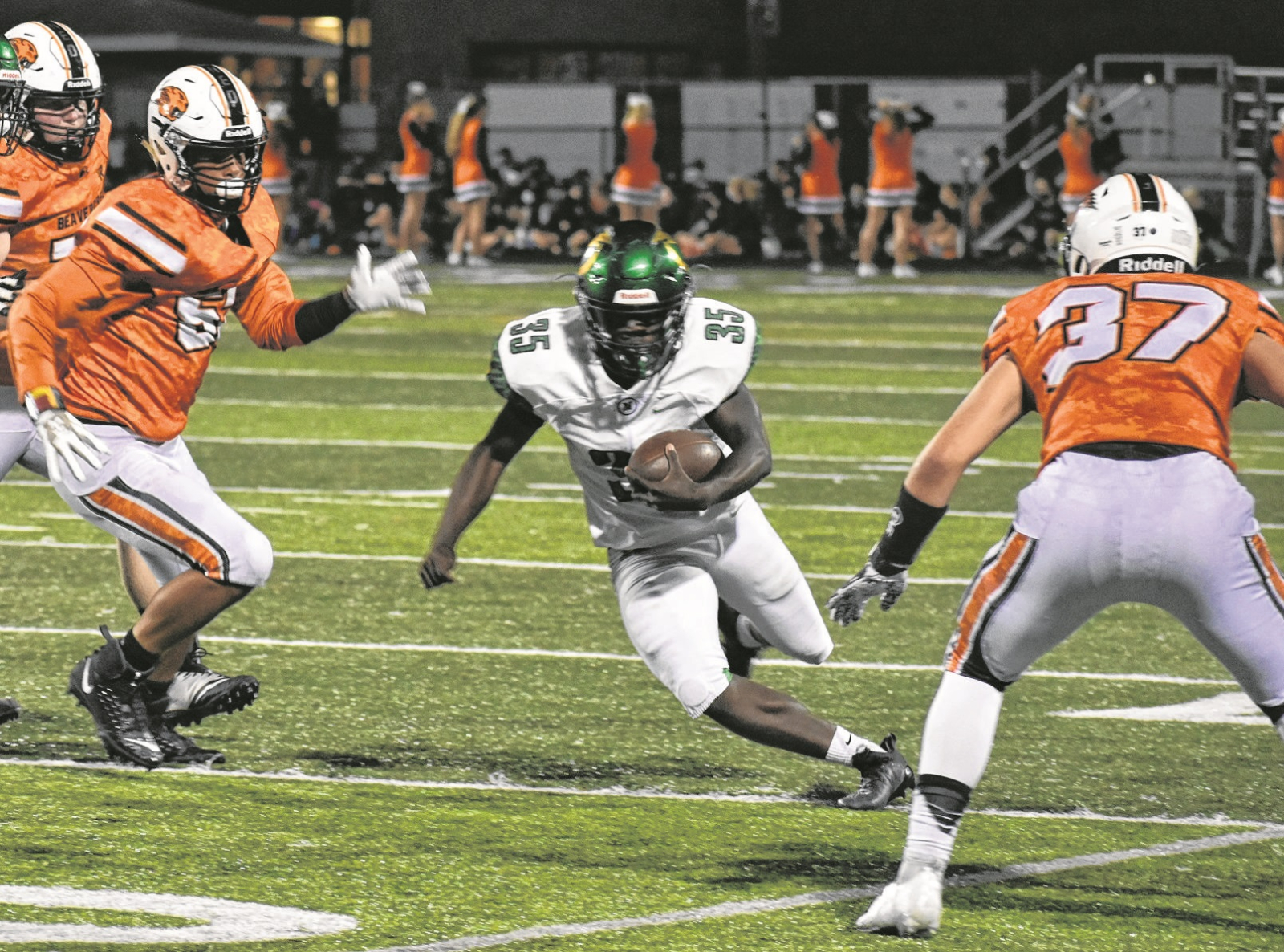 James McKinney cuts between a pair of Beavercreek defenders to set up a second down and three at Beavers’ 39 yard line. 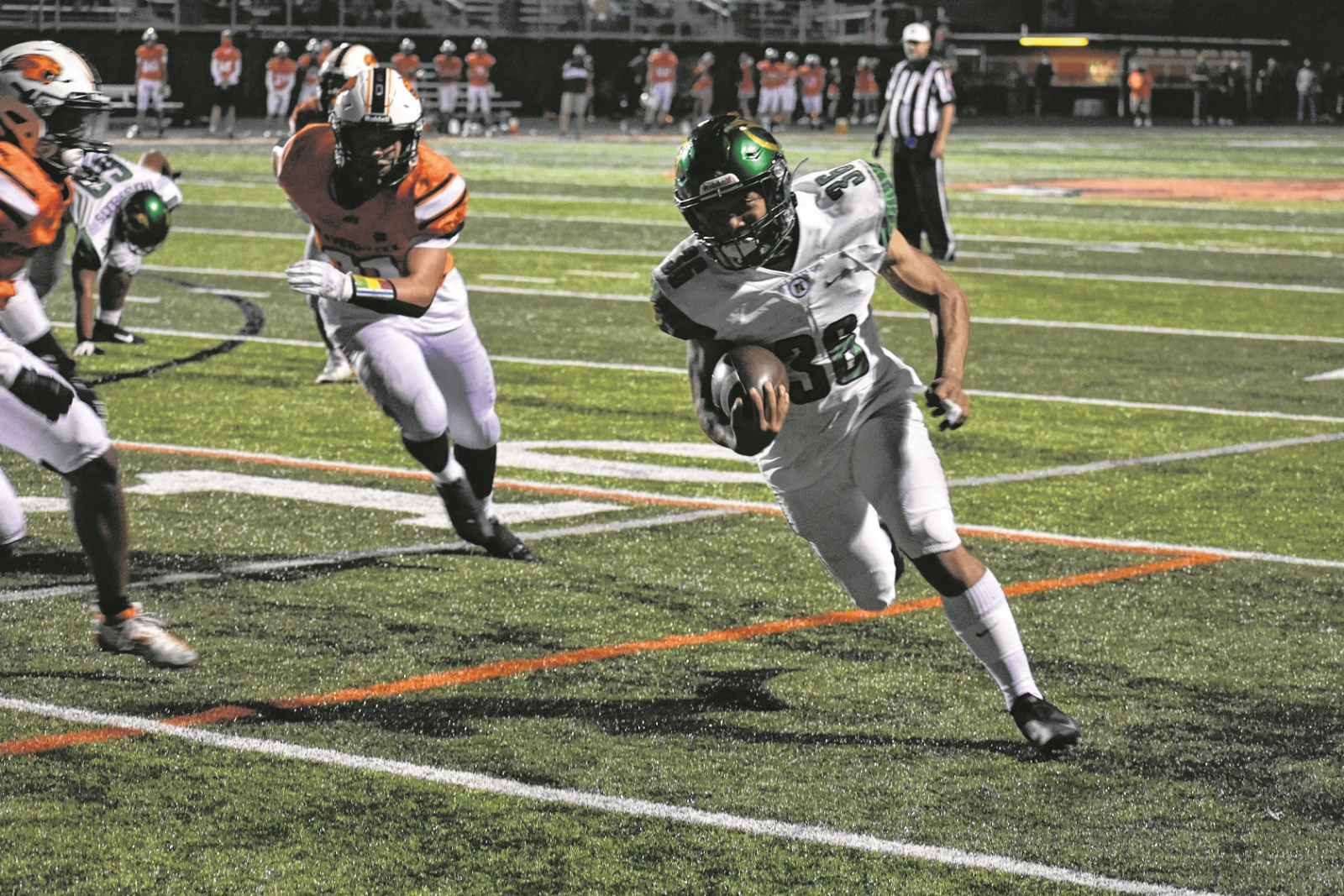 Cameron Jones scores on an 11 yard run during the fourth quarter to boost Northmont’s lead to 42-0.