CLAYTON – Cade Rice fired a 20 yard touchdown pass to Javien Brownlee with 16 seconds left in the game Friday to cap another Northmont come-from-behind victory 48-41 over Marysville in the second round of the Division I, Region II playoffs.

Brownlee made a clutch catch just inside the left side of the end zone with a pair of defenders all over him. The side judge had to confer with another official to confirm the touchdown after Brownlee threw the ball away in his excitement after making the reception.

Brownlee hadn’t played since Sept. 11 when he sustained a broken finger at Beavercreek. Friday night he snared eight passes for 49 yards, coming up with clutch receptions in key situations, and scored two touchdowns including the winning score.

“Brownlee came back tonight and played great. It was his first game back since Beavercreek when he had that terrible hand injury,” said Northmont coach Tony Broering. “This was his first live action. He practiced, but he couldn’t do anything this week. Tonight was his really first real reps and he played great.”

Senior quarterback Cade Rice had another outstanding game completing 27 of 42 passes for 384 yards and seven touchdowns; one touchdown short of tying the school record for most touchdown passes in a game set by Tyler Horner with eight in 2004 vs. Springfield North.

“The offense is so explosive,” Broering said. “The drive before the last touchdown was like three plays. It was just amazing. When Cade Rice gets going he is hard to stop. He did a great job scrambling out of their pressure and he kept his composure. He was getting hit a lot and it doesn’t faze him. He just keeps going.”

Right before throwing the winning touchdown pass Rice got hit hard after getting forced out of the pocket and scrambling to the 20. Rice stayed down after getting the wind knocked out of him on a hard tackle forcing Northmont to burn a timeout with 27 seconds left.

This game featured more twists and turns than a Mar-Chele Pretzel.

At the start of the fourth quarter Northmont went for a first down on fourth and three at the Marysville seven yard line. Rice kept the ball and came up two yards short.

On Northmont’s next possession the Monarchs forced Northmont to punt at its eight yard line. On fourth down and 22 Marysville linebacker Aidan Lambert blocked Xavier Vuong’s punt with the ball careening out of the back of the end zone for a safety to cut Northmont’s lead to 34-33 with 7:05 remaining.

As punishment for suffering a safety the Thunderbolts were forced to kick the ball to Marysville. Vuong launched a deep kick that Powers had to race backwards and field inside the 10. The Monarchs got penalized for holding on the return taking over at their 17.

Nine plays later Marysville caught Northmont flat footed when Powers took a handoff and lofted a 35 yard halfback option pass to a wide open Cameron Jones for the go-ahead touchdown. Griffin Johnson scored the two point conversion run to give the Monarchs a 41-34 lead with 3:24 left.

Brownlee returned the Monarchs kickoff to the 26. On first down the Thunderbolts’ Cameron Jones caught a short pass from Rice and fought his way down the left sideline for a 37 yard reception to give Northmont a first down at the Monarchs 37 yard line.

Northmont’s defense held Marysville to a three-and-out with Rod Moore returning a short punt to the Monarch’s 45 to setup the winning drive.

Marysville fumbled on the opening kickoff with Northmont recovering the ball at the 25. On first down Rice fired a 25 yard touchdown pass to Markus Allen and Vuong’s kick gave the Thunderbolts an early 7-0 lead.

On Marysville’s next possession Zach Martin intercepted an Ethan Musel pass and returned it nine yards to the Monarch’s 46. Northmont couldn’t capitalize on the turnover and the first quarter ended with the Thunderbolts on top 14-7.

Northmont boosted its lead to 20-7 on a 20 yard pass from Rice to Allen. The point after was blocked with 11:49 left in the half.

The Monarchs answered with a six play drive with Johnson scoring on a one yard run. Hall’s kick cut the T’bolts lead to 20-14.

Northmont drove deep into Marysville territory but fumbled inside the five as the half ended with the Thunderbolts clinging to a three point lead.

In the third quarter Gregory caught a 40 yard TD pass and Allen a 21 yard TD pass from Rice to give Northmont a 34-17 lead before the Monarchs came storming back to take a 41-34 lead.

“I am proud of the boys. The defense stepped up at the end when we needed them to and the offense just scored,” Broering added. “They are just so explosive. Just when you think you can cover Markus Allen and Rod Moore you have to deal with Brownlee. T.J. Gregory also was awesome. We expected Brownlee to play well but I didn’t know he was going to play that great. He is a special talent too. Just when you think you’ve got it figured out we have another guy step up.”

Northmont improves to 8-0 and advances to host Springfield (7-1) in the third round of the playoffs this Friday. The Thunderbolts defeated the Wildcats in overtime 38-35 on Sept. 18 to hand them their only loss of the season. 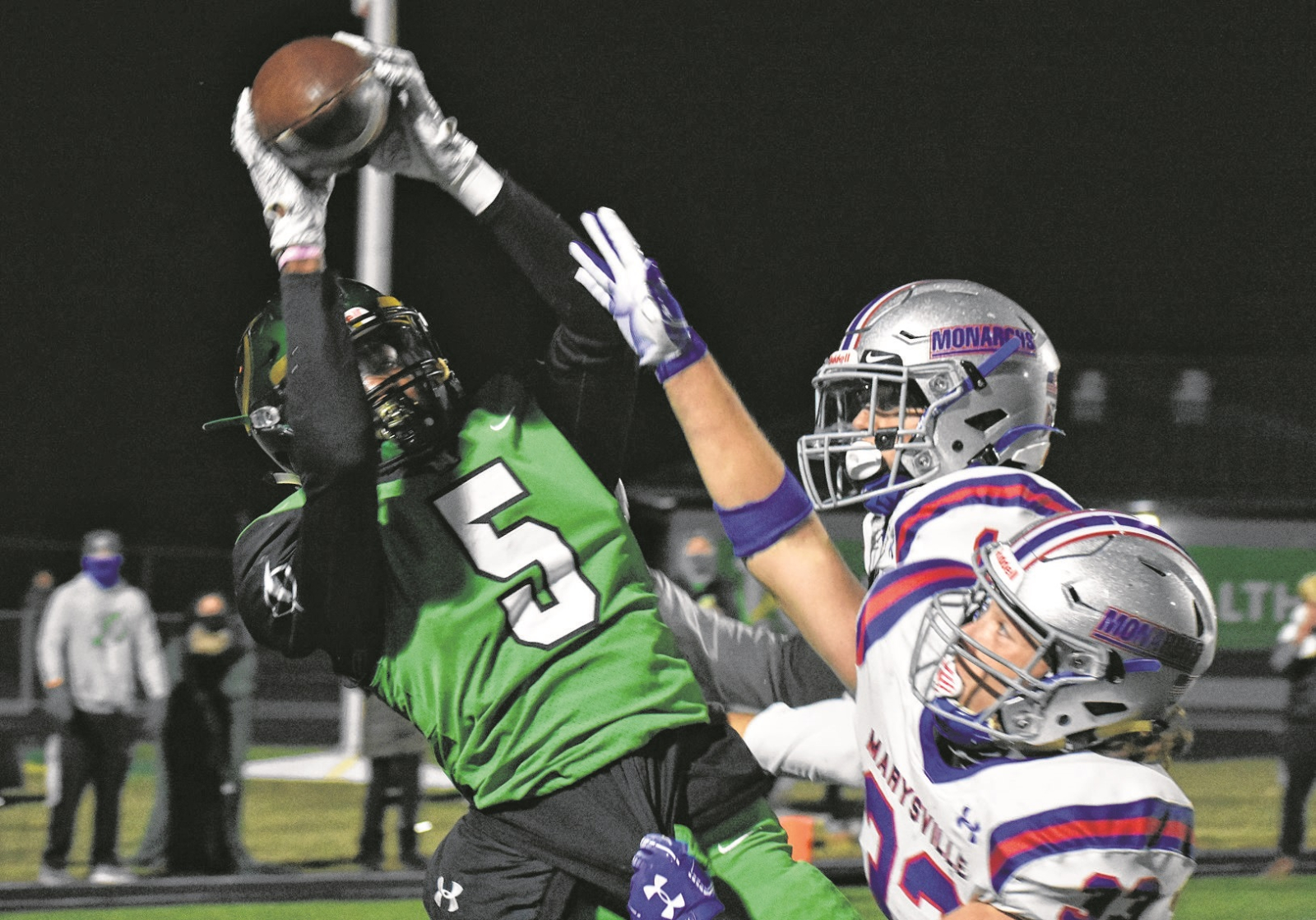 Javien Brownlee hauls in the winning touchdown pass with 16 seconds left in the game with a pair of Marysville defenders applying pressure. 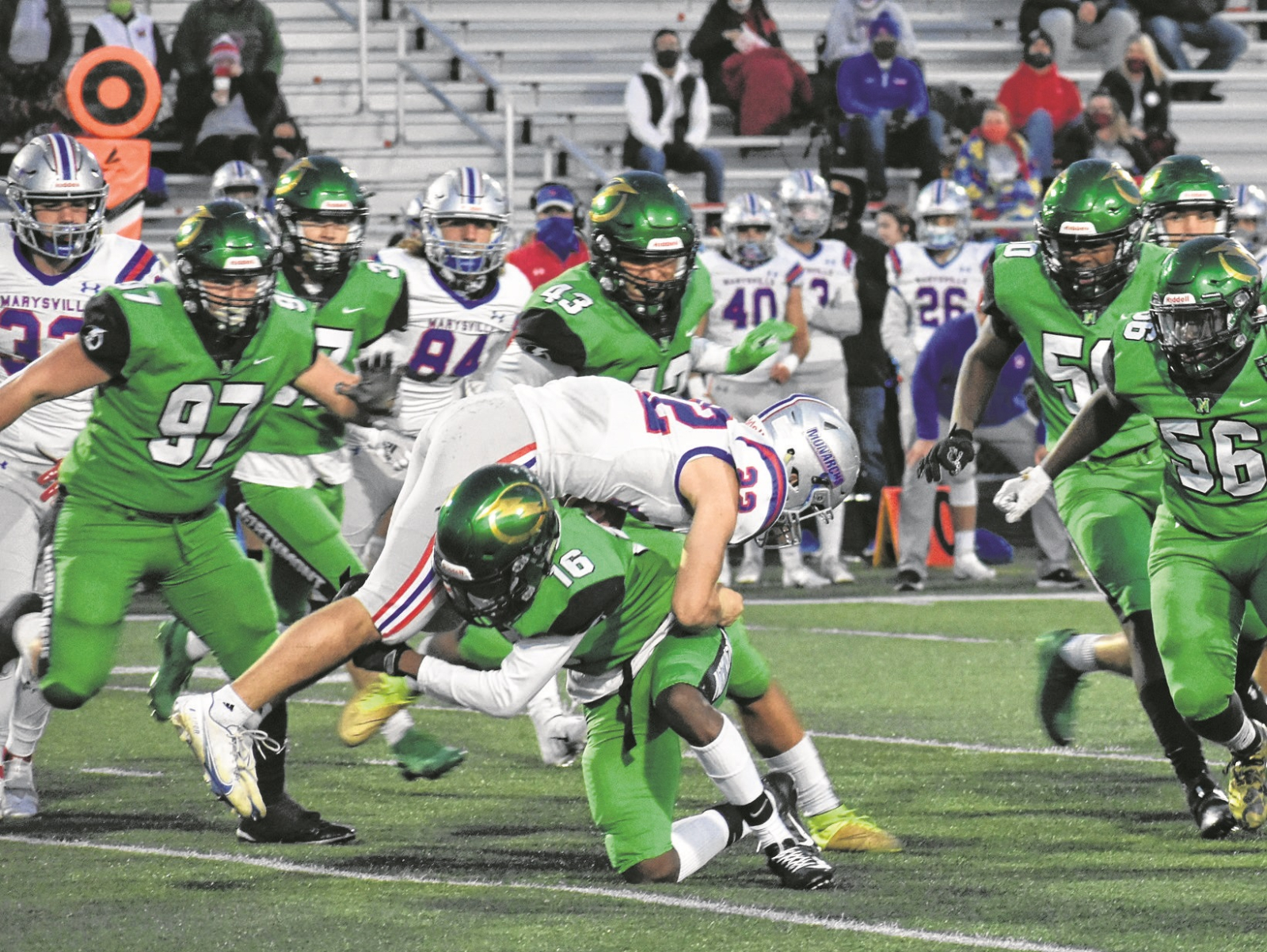 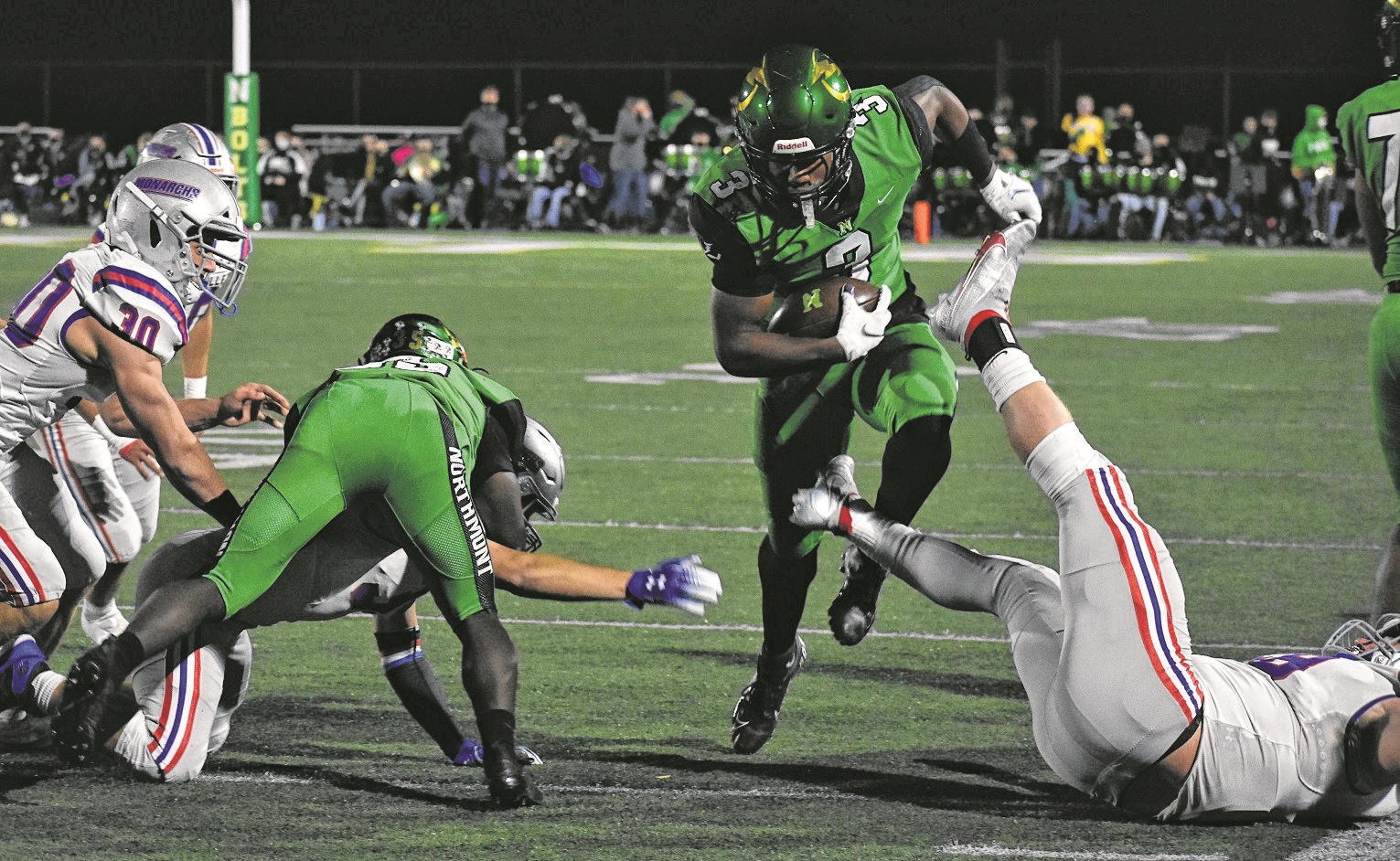 Markus Allen fights through a swarm of defenders along the left sideline. 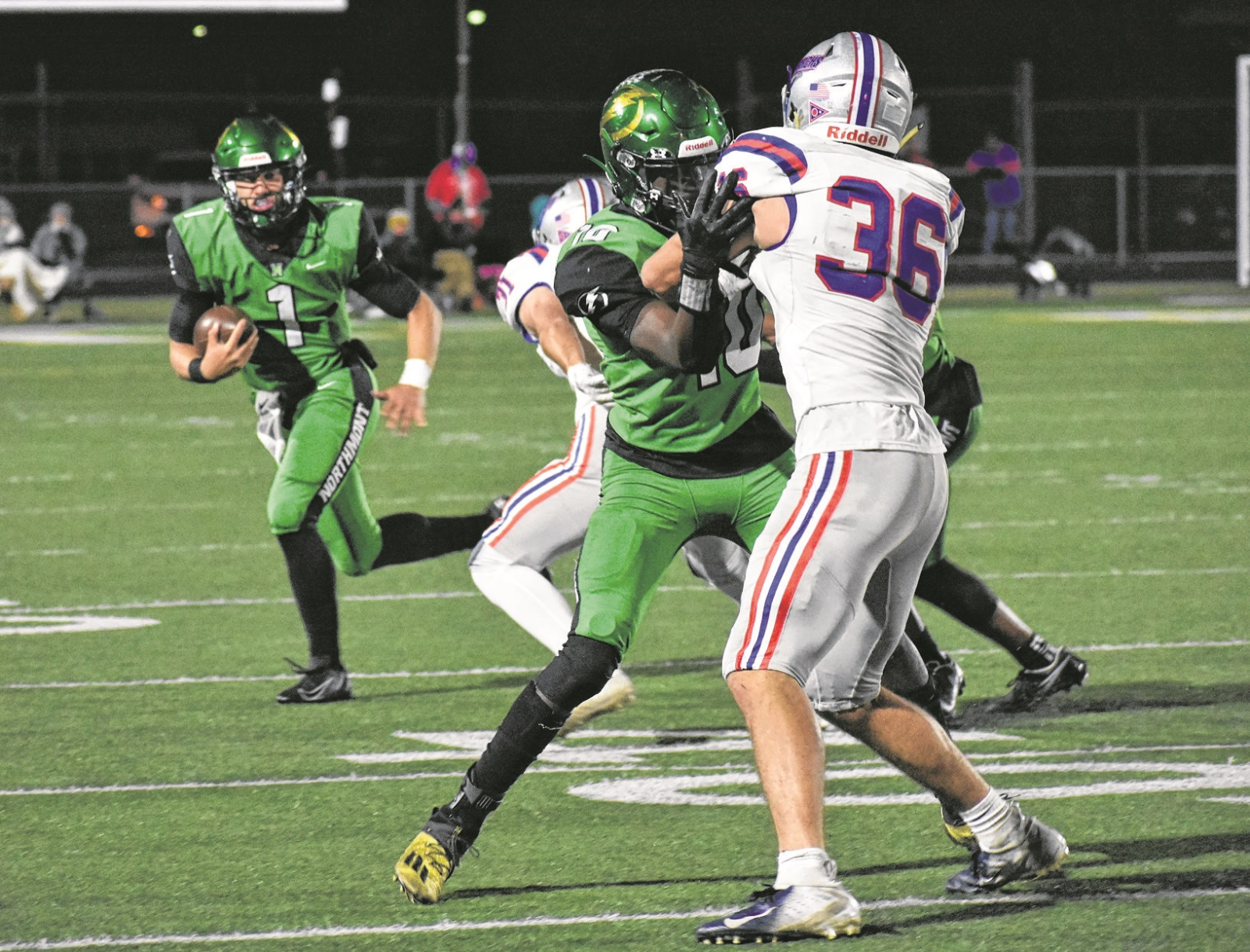 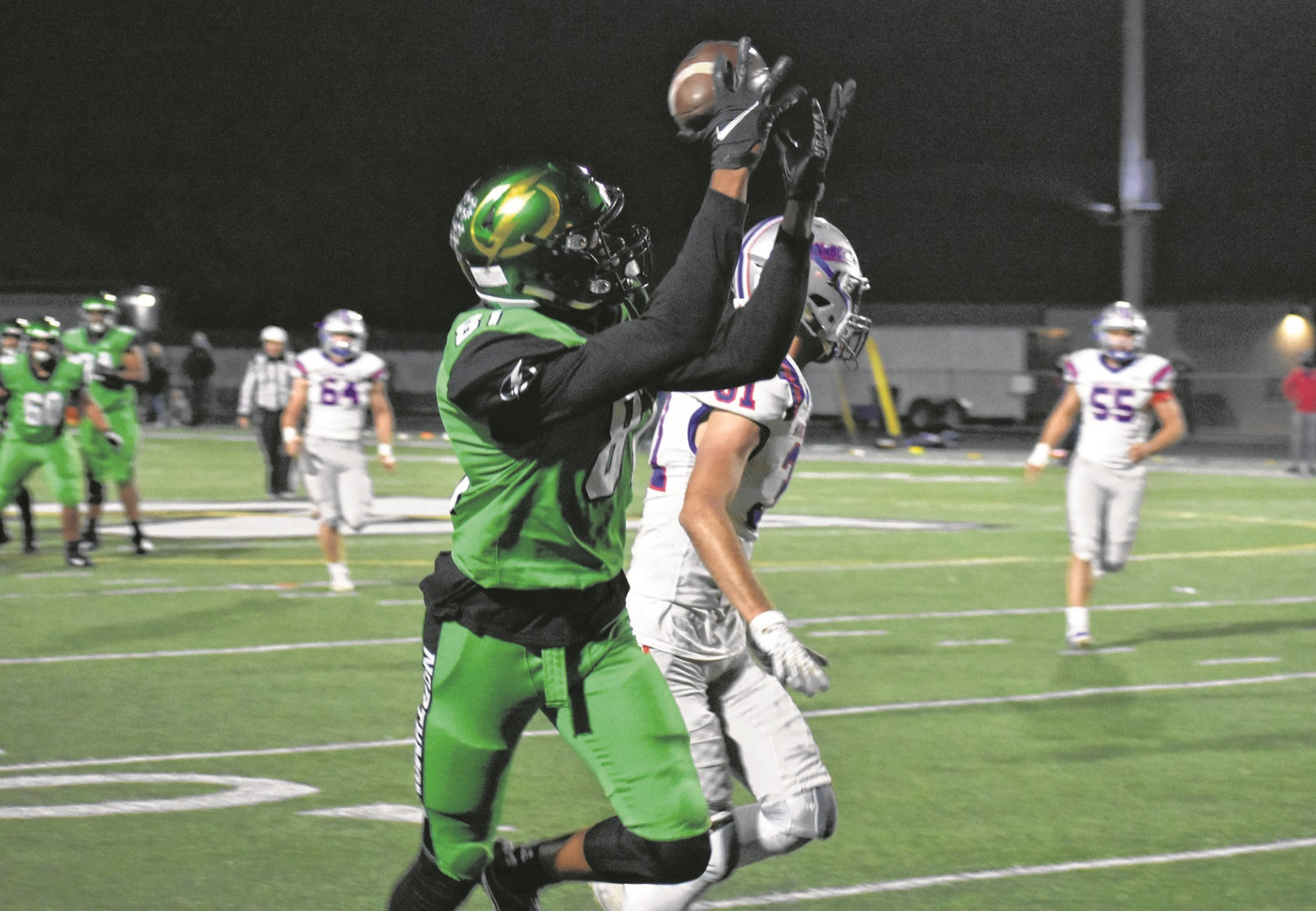 T.J. Gregory hauls in a pass for a first down during the third quarter vs. Marysville.