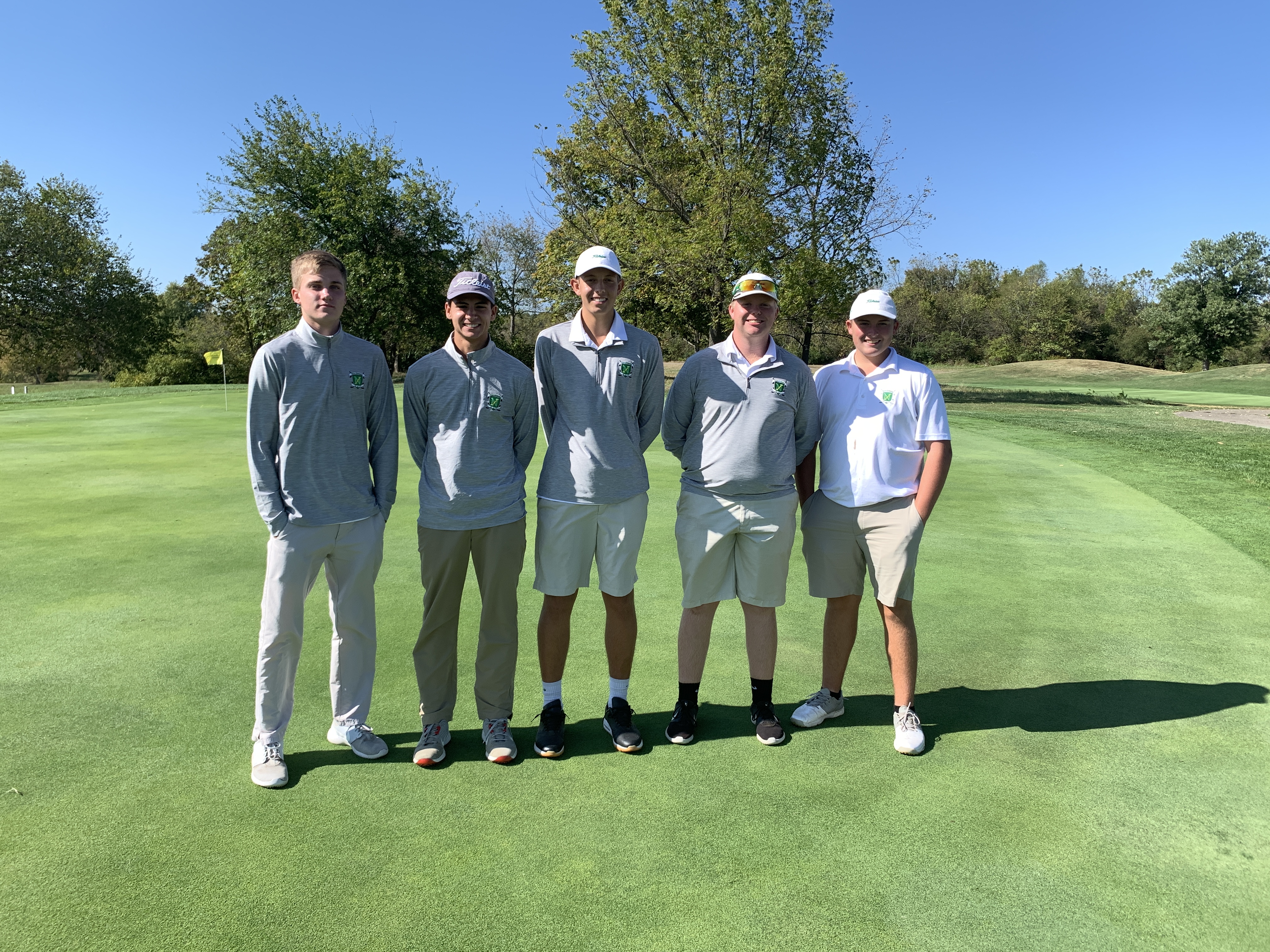 (Click the link following this article for full-field results)

The event was contested on the 3,359 yard East and 3,464 yard South nines. Perfect weather conditions made for ideal scoring opportunities on the difficult par 72 layout.

The Thunderbolts finished in 14th place out of 16 teams with a combined total of 363.

Northmont was led in scoring by senior Brendan Siehl who posted an 80. Brendan went out in 42 stokes on the South before rebounding with 38 strokes on the East. The highlight of Brendan’s day was when we made a birdie on the par 4, 2nd hole (East). He finished 9 strokes away from qualifying for the State Tournament as an individual. Brendan has had a remarkable senior season that has seen multiple rounds in the 70s, many all-tournament awards, and also selections to the first team and all-conference teams in the GWOC. He established himself early as our team leader in scoring and he has encouraged his teammates while exceeding his expectations this season. It would be great to see Brendan get the opportunity to play at the next level as he is still discovering his potential in this great game.

Senior Layne Tobe went out in 43 strokes on the South, and he was eyeing a personal best score as he made the turn. His hard work on the East paid off when Layne sank a five-foot birdie putt on his 18th hole of the day which was also the final hole of his high school golf career. That birdie secured a second 9 total of 43, and 86 for the day which was his best 18-hole performance for the TBolts. Layne has been a solid contributor all season and has found stellar form as of late. Layne was named to the second team in the GWOC. We will certainly miss his bat in our lineup next season.

Senior Justus Thomas gave it his all today in a round of 98. He rebounded after a difficult start on the South (52) to improve by 6 strokes on the East (46). Justus drained three 20-foot putts for par on South hole 1 (par 4), East holes 5 (par 4) and 7 (par 5). The Thunderbolts are going to miss Justus’s leadership on and off of the course next season. He has been a key asset to our team success through his three years as a varsity letterman.

Junior Brayden Hobert (99) battled all day long. After going out in 51 strokes on the South, he was able to close with 3 pars (par 4, 5th, par 5, 7th, par 5, 9th) in his final nine holes on the East (48). Brayden will be a focal point in the Northmont Lineup when returns as a senior in 2020. Brady has learned a lot from this year’s seniors and he will be very prepared for another District run next season.

Sophomore Josh Harbaum (110) made his lone par on his first hole of the day on the South (par 4, 1st). From there it was an uphill battle for Josh as he struggled to find his rhythm. Josh will be poised to be a leader for the TBolts in 2020 as a returning varsity letterman. In a comment to Coach Harlow following his round, Josh stated: “I know what I need to improve on so I can get back here again next season.” Needless to say, both coaches were ecstatic with his optimism heading into the offseason.

When the final putt of our day was holed, by senior Brendan Siehl, our 2019 season came to an end. It was a special year for the Thunderbolts. These boys overcame so much beginning with the tornadoes that ravaged our home golf course (Meadowbrook at Clayton) in May. With many hours of work put in, the golf course rebounded and our players prepared to begin a season that saw us down as we graduated 5 seniors from the 2018 squad. Many players stepped up big to help this team win the Greenville Invitational in August. We continued to gain momentum from there. The Bolts finished 8-3 in head to head competition this year. We then defied all odds by finishing 4th in our very difficult Sectional tournament to earn our first District bid as a team since 2009. Coach Harlow and Coach Hannahan are immensely proud of the accomplishments of our players on the golf course, but we are even more proud of the young men they have become. We are going to miss our three seniors, Brendan, Justus, and Layne! We will not soon forget their contributions to the Northmont Golf Program.

Watch out for the Thunderbolts in 2020. We will see you on the links! Go Bolts!