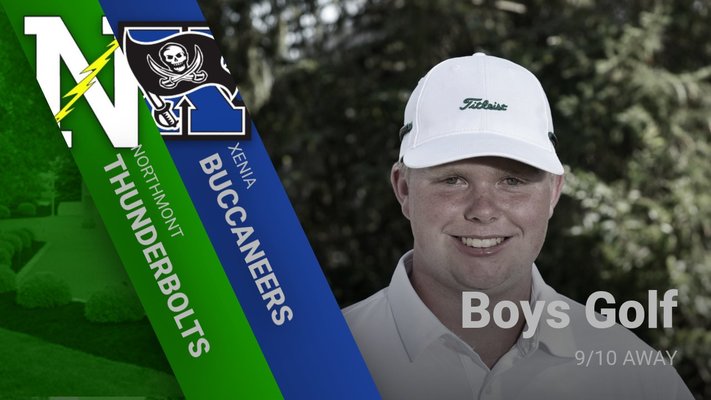 The varsity boys golf team traveled to WGC golf course to take on the Xenia Buccaneers today. The match was contested on the back nine holes. Temperatures in the low 90s, with firm fairways and receptive greens, made for ideal scoring conditions for both teams.

The shot of the day was executed by Xenia’s Aaron Adkins who stuffed his approach shot to just 18 inches away from the pin on the short par 5, 16th hole. Aaron calmly rolled in the short eagle putt that followed which helped him post 44 and lead his team today.

Match medalist honors went to senior Brendan Siehl (41) who carded a birdie on the par 5, 14th hole. Brendan has led his team for two consecutive matches and is trending in the right direction as we near postseason tournament time. Senior Layne Tobe tied his second-best 9-hole score of the season today. Layne’s highlights included back-to-back pars on the 15th and 16th holes in a round of 44. Layne has always been known as a long hitter, but his putter is starting to heat up. Be on the lookout for a breakout round in the near future for Mr Tobe. Sophomore Josh Harbaum started the season with a flurry but has struggled in recent weeks. Josh (45) righted the ship tonight by parring both par 3’s on the back nine (holes 11 and 17). Josh is primed and ready to make a run of good scores with some renewed confidence in his game. Our team scoring was rounded out by a pair of 46s posted by senior Justus Thomas and junior Brayden Hobert. Both players were one hole away from taking it even lower today. Justus’s memorable moment came on the difficult, dogleg right, par 4, 12th hole when he made a birdie! Brayden started the day off with the only TBolt par on the opening 10th hole. Brayden also added pars on holes 15 and 17. Sophomore Tucker Smith’s score of 48 was his second-best 9-hole performance of the season.

The Thunderbolts are in action again tomorrow when we head to the Springfield Wildcat Invitational. The tee time for that event at Reid North is scheduled for 10:00 am. We will see you on the links!